To play in a Swing tournament you need to be registered since we use the Swingtool which can be found here:

You can find the rules here

…but it is not necessary to understand the rules as the Swingtool handles most of it for you.

Copy to chat at the start of a tournament:

I will both be playing and checking the tournament (a bit) between games. So I’m slightly slower starting my next game.
We play in the money room and you try to win as many points as you can per game (or loose as few points as possible).
Set the game options to : x64, stake=1 all the time, Jacoby on, Beaver off
Jacoby is in effect (Gammons and Backgammons ONLY COUNT if the cube has been turned).
When only the finalists left…
Max 3 games are played…
If the chip loser loses ONE game, that’s it…
So if for example one finalist has 1-2 points left, there is just no point playing 4-7 games.
But if you have 3 chips and 40 chips in total in the tournament, winning 3->6->12->24 can still switch who wins the tournament.
Everyone does not have to wait for the next tournament if someone has a few chips, wins, loses, wins, loses…
These rules makes it faster to start a new tournament.

And the longer version:

So I will just briefly explain the small differences compared to a normal elimination tournament.

Swing games are played in a money room (I will explain that later).

When you set up a money game in Piranhazone you should use the following settings:

Stake 1, Limit x64, Jacoby ON, Beaver OFF.
(Piranhazone does not support stakes like 6 or 9 so we always use stake = 1 and the Swingtool handles the rest)

Any games you play are now recorded automatically so the Swingtool will update the assignments as you play, automatically. The page refreshes at times but after your match finishes the fastest way to see what will happen next is to go and refresh the page manually. If we play an online live tournament this is the common way to do it. If we play a longer online tournament (with 3-7-10 days to play your next game), you will get a mail telling you who to play, for what stake and by which time.

In a swing tournament you get a certain amount of chips to play with. Once you run out that’s it. Compared to an elimination tournament you usually get to play a bit more. The winner is the last man (or woman) standing. 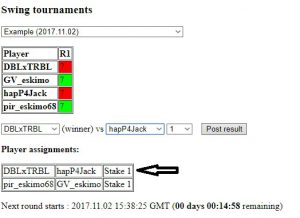 Swing tournaments have a built in function to ensure the tournament ends within a decent time (around 2-2.5 h is common, regardless of the number of players!). This is represented by the stake. Every now and then, the stake increases, forcing more and more chips to be used per game. In the example above the stake will increase every 15 minutes. A live tournament usually has 10 or 15 minutes as the stake increase time.
Simply think of the stake as a multiplier. Once the stake is 2, losing 4 points means actually losing 8 points. If the stake is 5, even dropping the cube immediately will cost 5 points.
The reason is, once there are only a few players left, we don’t want players to sit and play for a few point when they have 34 chips. So as players are eliminated and time goes by, the stake increases which effectively keeps the amount of chips and the amount used pretty much the same.
Those familiar with online poker tournaments can see this is similar as the blinds going up in price.

You only play one game against the same opponent (except when there are two players left).

If there is any player free that is eligible, assignment happens immediately after our previous game ended. No more sit and wait… It is of course ok to take a short break between games if needed.

To explain a money game it’s easiest to just start by saying, a money game is commonly just that, a backgammon game where actual money is used. That slightly changes the way you play, basically you want to win as many and lose as few points as possible. We are just playing for points.

If you are running out of points you can end up in a situation where you don’t have enough points to double or take a cube. At this stage the All-In rule comes into effect (again, similar to a poker tournament). You simply use all the chips you have and if you win, you will win a maximum of that many chips. The only time this really matters a lot is best explained with an example:
Let’s say you have 5 chips left. Your opponent has the cube at 4 and doubles you back, now with a cube of 8. Since you already are in for 4 chips you don’t need a 25% winning chance to take. In fact, almost any situation is a take for you when you are down to your last 1 or 2 chips in these situations.

To speed up play one rule is commonly used, called the Jacoby rule. Jacoby means you will ONLY get gammons and backgammons when the CUBE HAS BEEN TURNED. This makes play faster. If you think you are winning, you often have to turn the cube earlier than in a normal backgammon game. Otherwise a lucky roll might get you a gammon, which is useless if the cube wasn’t turned. Giving the cube too late after a lucky roll just means your opponent will pass. This also means people are not playing another 2-3 minutes just to see if they possibly get a gammon. If the cube hasn’t been turned, give it, let your opponent pass (or better for you, take 🙂 ) and move on to your next game.

Oh, and each game has a timer. Do not let it run out or you automatically forfeit. Don’t worry though, the timer gives you back 10-30 seconds per move (don’t even remember how much) and you have an additional 5 minutes, per game. Generally you never drop below 4-4.30 minutes unless you have a toilet break or chat madly. No one has run out of time so far in any real game so without me mentioning the clock you might not even have noticed it 🙂 .

That’s about it. Once you have played a bit you will see this is not much different from playing a match. The real benefits come from players never having to sit and wait for their next opponent and even if you lose in the beginning you usually have plenty of games until you run out of chips. Especially when coming to a live tournament from far away this is a huge benefit.

Good luck and have fun…

In case your players are familiar with the Swing page you might let them enter their games themselves (not rocket science). Occasionally they (or you) will mess up posting less points for a gammon etc usually. If so, you need to rollback the game posted. This might result in a stake increase. However, I’ve left in a possibility to resolve this peacefully.
During a rollback, the stake timer is reset to it’s starting value. If you think resolving things took time and the stake increased during that time resulting in a +2 (+1 for finale, +1 for timer), post the match again and roll it back once more (and the timer was reset on the first rollback, it will not fire, so the stake is one lower)).  I have never needed this but I know how competitive backgammon players can be.