For years I’ve felt backgammon has lost some of it’s appeal with the computers teaching us how badly we really play. Sure, there are some variants like Nackgammon but I needed something different. Something that also addresses the needs of casual players, effectively making play as much fun and rejuvenated as when they first learned to play. In the end I tested out one simple change that I thought would generate more than the changes it did, which were, in fact, almost none. The end result is basically one rule change and a few clarifications.

To create a variant of backgammon that is easily playable and still different enough to both be fun and thought inspiring. It is important to notice that the goal is not to create something very different to backgammon but to keep the changes to an absolute minimum while still attracting players (also those who have left).

(and the rest is not required, it just mostly clarifies the rules stay the same)

It is still possible to get doubles (11-66), they are just less common.

And finally the obligatory Youtube videos for the illiterate

Just to check who reads past Youtube references these days… A common position, simply showing you can get the typical backgammon horror rolls in Eskgammon too. Except there are quite a lot more of them, which means minimizing damage is much more difficult or even impossible at times. 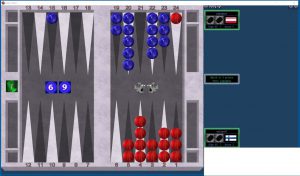 Apart from the main quote above I think this one summarizes it as far as the original idea goes.

“i play for fun, never studied bg books or used analyze tools in bg and eskgammon is much more fun 🙂“

(quote from one of the first Eskgammon converts, with us from the start, after almost 10 years of playing)

Unfortunately there was a small side effect. Eskgammon is (way?) more competitive than normal backgammon. At first we thought it was due to the money game format suiting Eskgammon so well but after adjusting the swing tournament format to match play, mind you, I caved in (designing the addition) after more than five years saying it could not be done well… as of 2018, swing match tournaments work as well as normal ladders with the added benefit of a known tournament finish time!

(*)
So, Eskgammon is just for kids? Wrong. This is one of the first impressions you hear until people have played enough (not many games/matches needed).

More importantly, you can play it for fun. But if you want to play it competitively, be it money, match, swing, chouette or any ladder format, it works just fine. You just have to use your brain instead of botting away.