And everything else stays the same (except the gameplay ).

And finally a picture of a position you don’t want to end up in (or more precise, a roll you don’t want to roll in a position like this). This explains a key aspect of Eskgammon, when you expect to roll badly only with one or two rolls you are most likely overlooking just as many possible bad rolls. That works both ways, a roll your opponent really did not want to see you roll, could also be the roll you just rolled, which he didn’t anticipate. 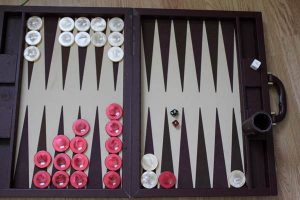 Ok, the not so visible roll is 81 (for Red). Still stuck, been there, done that.
Not to mention rolling 91 from pos 10, 81 in pos 9 and your opponent being incapable of rolling a 1 twice… Will it be thrice…? The only really certain thing is that there are two players cursing their luck at this stage 🙂 .

Well, a few more since the first is simply the most common beginner’s mistake. 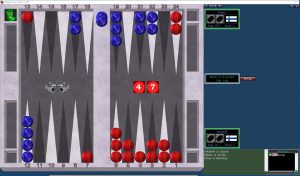 Trick question: is blue a favourite to come out or not next roll? 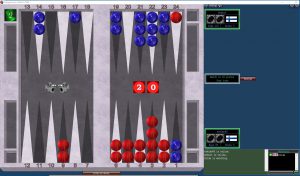 And a simpler one. The high dice sometimes really wreck havoc on any plans you have.
Statement 1: Even the world’s best Eskgammon players don’t see everything coming.
Statement 2: Even though there is less chance to hit, there are more of those chances in a game.
Statement 3: Less * More = swings happen, a lot. Hence the favourite nickname, Swinggammon.

Primes are much less useful… tactically they can be great. 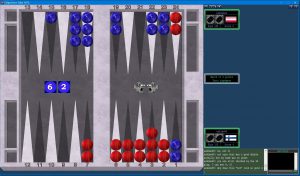 Looks like a great win for the red, but it has little to do with the prime. Red simply has a better home, for a while, at least. 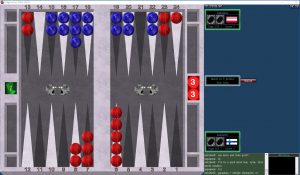 It did. Not much though, no home was much worse. In normal backgammon you would have been a dead duck, probably. In Eskgammon, red won. No trick question about who is favourite… but I would not bet on either actually. 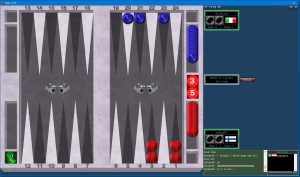 Even simple doubling needs to be rethought. In normal backgammon this would be an easy red double,  marginal take (thought it would be an easy take actually at first glance). In Eskgammon, you are 80+% favourite so Blue should pass. Mostly because rolling a 2 is only 25% and even if doubles are harder to roll those add up enough to offset Blue’s possible doubles and then some.