Note: “round” means looking back at previous chips one round earlier. Some players might have played lots of matches more than other players so there is no actual round in a swing tournament except for stake/time purposes.

Originally optional rules (but recommended and nowadays already default rules – using either one is usually sufficient, using both means everyone does not have to wait in a 1 vs 119 chip position – we will just play another tournament instead):

Preferred ending: Once only two players remain the tournament ends according to current status once the finale chip loser loses his first match. This speeds up the finale immensely and gives the chip leader a (slight) advantage which is fair anyway. In practice this means the chip trailer always doubles (and the leader has an option to take) and the finale is concluded as soon as the initial chip loser gains enough chips to “survive” one match and still remain chip leader, unless there is a tie.

Speed up ending: Once only two players remain a maximum of three matches are played after which the tournament is adjudicated according to current status, unless there is a tie.

Both these cases may result in a tie situation. If so, the swing assign one more game as that will determine the winner properly.

Reasoning:
In a 3 match finale a 4th game is the obvious solution.
In the scenario where the chip loser got more chips in the initial games(s) and then lost with both ending up with the same amount of chips… Now, as the chip loser obviously won the previous game and became the current chip leader one could technically say that the original chip loser won the tournament. This is how ties are resolved in assignments, looking back at the previous game for who was the chip leader among the two players. For a finale, this is not strong enough argumentation so the clean way to resolve it is to play one more game.

Play time:
We have tested with 10/15/20 chips earlier but for some reason 12 seems quite good for most player amounts. Around 6-12 players in a tournament can be expected to have one tour running 2-3h using a 15 minute ante up.

Manual bookkeeping:
It’s definitely preferable to use the Swing tournament tool for tournament bookkeeping (but that means registering your Eskgammon players – this is however the goal for any serious Eskgammon money tournaments). However, if you don’t have a laptop or tablet (or even smart phone) available, recording the tournament manually and entering it into the Swing tournament tool later (for statistics purposes) is perfectly ok. Look at the picture below to see how a tournament in progress would look like. Here are some tips on how to do it as it’s not simple to enter a tournament later if the games aren’t recorded in order.

Setting up players and choosing chip amount etc is trivial.
Each assigned match should be given some identification (A+A, B+B). Since match completion order is crucial it is almost impossible to reconstruct a tournament without this information (or having a huge amount of luck entering matches in the correct order). The letters of the alphabet are usually enough for 4-8 player tournaments.
Record current stakes as 1, 2, 3 etc below the main sheet. I would recommend having a timer on repeat and adding the times when the timer fires OR a player is eliminated. While recording the times isn’t necessary it will give you a better picture of how fast a swing tournament really progresses, regardless of the amount of players. 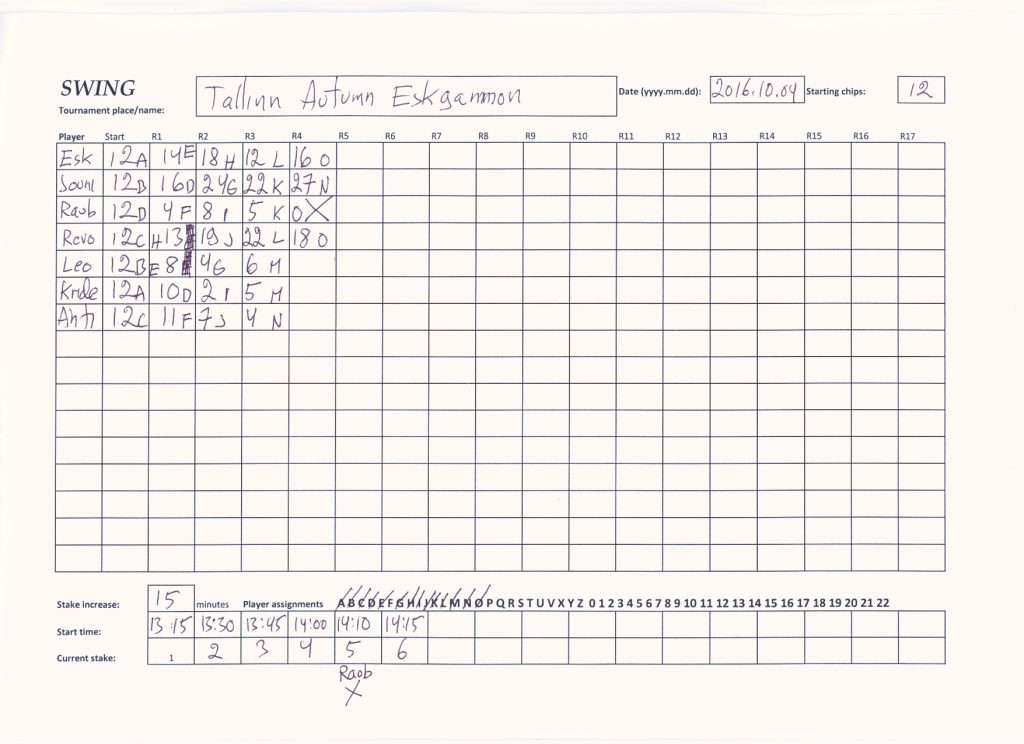 Please note a manual tournament that will get recorded online later looks rather messy because of the letters assigned to know who played who in which order. Without later recording chip amounts only makes it a very clean sheet. The online tool is of course the best tournament handler.

If you want to use the above yourself here is an Excel version:
swing_sheet_16_players_better_version

Change log (more popular means we have to do this right):

2018.10.06 It took almost 10 years to get our first tie in a finale. Ties now force another final game.
2016.10.08 Player leaving tournament added. Endings used added to default format.
2016.12.22 All instances of the word “game” changed to “match” (just a few). Swing tournaments work best as money games. However, with less chips 3p or 5p matches could also be played. However, as tournaments would drag on forever even with 4 chips I would suggest an additional MATCH cube is added when playing. i.e., in addition to having the 3p match cubed as normally another cube would be added that determines the stake of the match. It would be distinct from the cube used in the match and switch from one player to the other just as a cube normally does. While it might be faster to have the match cube also double stakes it might create unforseen problems. In any case, the thought of playing #p matches is added mainly for IBA purposes and has never been tested in practice.
2017.01.03 Added a picture of how a manual tournament would look (bookkeeping).
2018.08.26 Made some improvements to the swing tool the past two years, pretty rock solid by now with all rules and optional endings coded in. Added swingtool assignments being used even if the swingtool contains a bug. After 5 years of bugfree assignments, adding the two optional rules actually had a tie resolved wrong. Maybe some new additions in the future will break something, no one is perfect after all.